It’s not something which really merits a declaration of interest, since this selection of 45s is in no way objective – but I should probably explain that Another Sunny Day was Harvey Williams, who is an old mate of mine, so I listen to his music with the ears of a friend rather more than those of a music critic, though I like to think that I’d have chosen one of his records even if I didn’t know him at all.

Listening to London weekend, which gathers together Harvey’s singles for Sarah, the energy of ‘What’s happened?’ really stands out for me, along with the characteristically lovelorn yearning (both lyrical and melodic) of the later ‘Rio’. ‘What’s happened to you, my dearest friend?’ (to give it its full title) brashly tells the tale of two friends grown apart. Charmingly, given this was more than twenty-five years ago, the first line is ‘We were both young once…’ It’s the somewhat black and white worldview of a young man looking back on boyhood, and in that regard it typifies the kind of cultural ‘which side are you on?’ that I and many of my other friends also espoused at that age. Things were black and white in both our eyes and Harvey’s early lyrics, as they were in the emotional landscapes of so many young men of independent (and often introverted) leanings. Though I’ve always suspected that Harvey might to some small extent have had his tongue ever so slightly in his cheek when penning his subsequent single, ‘You should all be murdered’.

I distinctly remember seeing Harvey for the first time, talking to Bob Stanley at a Hurrah! and Jasmine Minks show at Bay 63 in west London in November 1986; he stood out rather, with his as-if-bleached blonde hair. Given that we thereafter kept turning up to the same gigs, we were bound to get to know each other, but I first met him the following year in his native Newlyn in Cornwall, in the company of my Devonian friends Tim and Christian. Inevitably now when I hear Another Sunny Day, I think of four lads running an indie kind of amok in Penzance and St. Ives, revved up on Newquay steam beer and a diet of listening which included Harvey’s own demos, the Stockholm Monsters and Pet sounds.

In the late eighties and early nineties, Harvey had a flat overlooking Ravenscourt Park in west London, where I and a couple of other friends stopped one night after watching him play as part of the Hit Parade in tubeless Harlesden. The following day turned out to be the first properly warm one of 1990, and Harvey decided to lead us out onto his (in theory inaccessible) flat roof, so that with the park below us, he and Michael could play guitar, and we could all drink wine and listen to music over the odd game of Scrabble. Looking at the photos, I suspect we’re lucky we lived to tell the tale, but it remains a golden day in my memory, a ‘one day like this a year would see me right’ kind of day. Despite everyone else’s intention to make a second night of it, I left in the early evening, feeling obliged to show my face at a local protest against the poll tax in north London, and so soon found myself in among a starling-like flock of rioting anarchists running away from hawkish shield and baton-wielding cops. I recall I frequently paused to reflect that I might have been having a far pleasanter evening back in Ravenscourt Park, but nevertheless, you can understand why the notion of some of the music to which I listened being cited as ‘twee’ by the music press used to get under my skin a little. 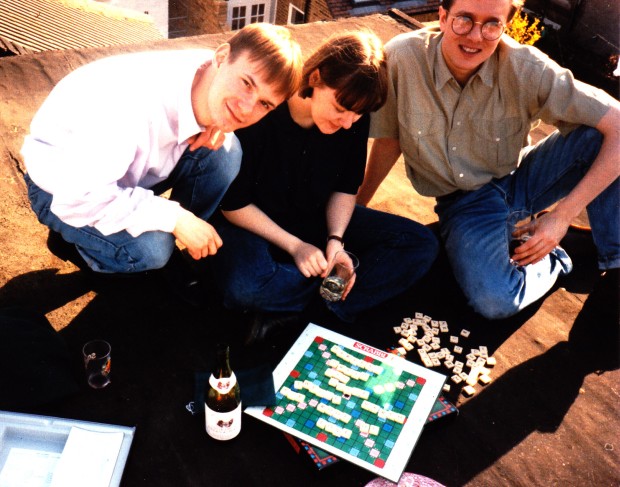 Sometime after his run of Sarah singles, I remember Harvey suggesting that I try writing some words for him. Music he could conjure, no problem, but although he wrote some good ’uns, lyrics by his own admission came less easily. Having then tried half-heartedly to write some myself, I could understand that better. It seemed not to be a form I was suited to, despite all my many thousands of hours of listening and singing along to pop songs. Or perhaps at that time I didn’t have very much to say; or rather, that I wanted sung. I wish I’d tried harder now, because a Williams/Williams credit would have looked great on the label of a seven inch or an LP. As it turned out, later it was my other half’s name which graced the sleeve of Harvey’s California LP, she having played clarinet on a couple of songs.

So there are lots of memories tied up in Harvey’s records, perhaps more than in any other music I listen to. Harvey trying to teach me guitar, while we were stranded broken down by the side of a French motorway, and wondering, as I always did when I listened to it, which of his friends his song ‘Green’ was about (he would never let on). My childhood home and another game of Scrabble feature in the sleeve notes for London weekend, written by our mutual friend Alistair, the pair of them having visited for a weekend once; not entirely coincidentally the weekend that I had what was by far the worst hangover of my life. And when I hear Harvey’s cover of the Bee Gees’ ‘Kilburn towers’, I think of that perfect day on what the Scrabble board spells out as being ‘THE ROOF OF LOVE’, looking out across Ravenscourt Park and the high-rises of west London. And although of course it’s not about us, ‘What’s happened?’ makes me think of the young men we were, and what a long time ago it all seems now.

I was struggling to articulate all sorts of things in this excerpt from Pantry For The World, and Sarah Records got caught in the crossfire.  A less violent, retrospective assessment of the label was delivered as part of B/w 42 on St. Christopher.

The sky blue colour of the cover of Pantry For The World was partly chosen in tribute to the covers of the first two Another Sunny Day singles.  It’s great to see Harvey’s early work available again in the form of London Weekend (Cherry Red).  I still love the contrast between the focussed musical rush of ‘What’s happened to you, my dearest friend?’ and its bewildered lyric, and the way the sound comes together with the words to create the yearning tug of ‘Green’.

The Orchids were definitely one of the more accomplished groups to record for Sarah.  They were consistent too, and the LP Striving for the lazy perfection lived up to its own billing.  It wouldn’t be quite true to say the same of the single ‘Thaumaturgy’ – miracle-working – but it’s not far off, and full marks to the Scots for helping to extend our vocabularies back in those days.