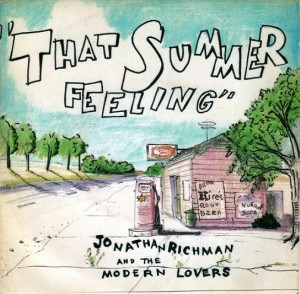 For a time Jonathan Richman was the musical laureate of childhood and lost youth. He strove so hard to celebrate it that often he seemed a Peter Pan figure, perpetually young and refusing to grow up. But if you listened closely as he went along, you began to hear a world of melancholy behind all the goofing, japery, and naivety. ‘That summer feeling’ is perhaps the moment when Jonathan’s bittersweet side rose to prominence, the song being (I think I’m right in saying) the first on which he voiced that decidedly adult ache for the lost child or teenager within, not to mention the cast of spirits peopling the hot, shimmering summers of the past; how it can both cut and raise a smile to remember those virgin experiences in fledgling lives – first kisses, first cars, perhaps even the dawning realisation that the land at your feet, the seas you look out over, the air that you breathe, all are yours, if only you determine to reach out and take them.  (And now look where you are.)  It doesn’t matter if you’ve never seen let alone driven an Oldsmobile, or sailed a catamaran off the coast of Maine, that instead your summers featured battered old Citroëns and (once) a yacht race around the Isle of Wight, that the details are different – you know the feeling Jonathan’s talking about, that summer feeling, and you know he’s nailed it when he sings that it’s going to haunt you the rest of your life.

Originally released on Jonathan sings! in 1983, Richman chose to re-record ‘That summer feeling’ for 1992’s I, Jonathan.  The later acoustic version adds an additional verse, stretching out the song across six minutes rather than the original four.  It’s a wiser, somewhat wearier Jonathan who sings this version; the passing years have only made him mourn the loss of those endless summers of youth all the more.  Both takes have that mysterious essence which leaves you in no doubt that you’re in the presence of a great song – one imbued with a bottled and stoppered magic that you are happy to sniff and let pervade the air of your own life on a regular basis – but for me the earlier version still has it by a head.  Somehow it feels more summery, less affected by the wintriness of Jonathan’s later outlook.  Mimicking that haunted feeling seems to work better than observing it from two seasons distant.

It’s tempting to follow up this 45 45s entry with the Rockingbirds’ breezy 1992 tribute to Richman, ‘Jonathan Jonathan’, and I would do so, were it not for the fact that I have it on 12 inch and therefore it’s disqualified according to my rules of engagement (I will also think the Rockingbirds’ ‘Gradually learning’ unlucky if it similarly fails to make the cut).  Coincidentally or otherwise, ‘Jonathan Jonathan’ appeared in the very same year as Richman’s affectionate tribute to his own chief inspiration, the ‘Velvet Underground’. The great thing about pop is that you can choose your lineage (though perhaps it chooses you), and as long as you are not a slave to it – as neither Jonathan nor the Rockingbirds were – in time you can be seen to merit your place in such an esteemed musical family tree.

‘Today, a young man on acid realized that all matter is merely energy condensed to a slow vibration – that we are all one consciousness experiencing itself subjectively. There's no such thing as death, life is only a dream, and we're the imagination of ourselves. Here's Tom with the weather.’ – Bill Hicks